This collection explores the various aspects of visual storytelling throughout the history of humankind, from the cave painting to the development of cinema. Objects in the collection demonstrate ways of seeing movement in imagery and still photographs. The collection is designed to be touched, examined and interacted with, in other words, it embraces the idea of the object as a pedagogical tool. The collection includes everything from books and films, to physical objects such as a 3D viewmaster, various camera’s, magic lanterns and slides, stereoscopic viewers and slides, and a praxinoscope. The collection is currently housed on shelves in Leigh’s living room. The items are on display for visitors to view and interact with should they so choose.

The collection began over 20 years ago, when Michele Leigh, an undergraduate at the time, happened upon her first stereoscopic slides at an antique shop in Southern California. Leigh purchased a single slide of SoCal Orange groves as a memento of her time living in Southern California. Thanks to inspiration from a Getty Museum exhibit called Devices of Wonder, the idea for the collection began to take root and expanded with the purchase of several flipbooks and a paper lift-a-flap cabinet of curiosities. Oddly enough, it was years before Leigh procured a stereoscopic viewer. Luckily, she found kits to build both a camera obscura and a stereoscopic viewer at the Camera Obscura in Edinburgh Scotland. The collection has grown exponentially and includes objects from all over the world. The collection has grown over the years in part due to Leigh’s continued purchasing of related items, but also through donations made by students over the years in Leigh’s Protocinematic Production courses.

Sample Items in the Collection 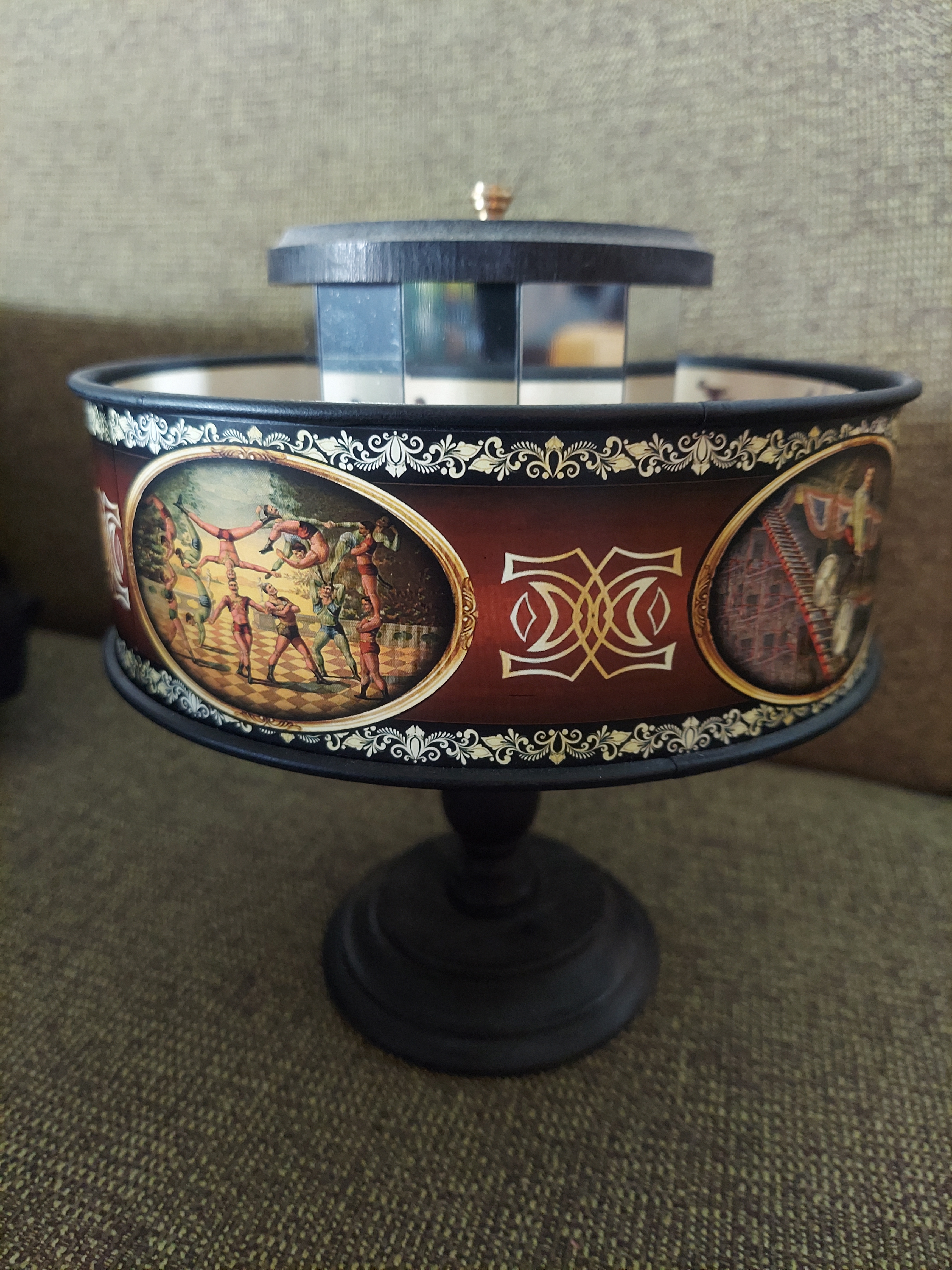 Praxinoscope – a variation on the Zoetrope, this is a reproduction of the 1877 optical toy, invented by the artist Charles-Emile Reynaud. A paper band showing successive images of movement is placed around the circumference of the drum. In the center of the drum is a series of mirrors, each reflecting a single image. The drum is rotated and the viewer looks at the mirrors, which reflect each successive drawing, providing the illusion of movement. This particular reproduction has a dark stain on the wood to imitate mahogany, the top of the mirrored column has a decorative design with Praxinoscope Antiquus around the metal knob, and the outer drum is decorated with Victorianesque images of circus performers. The praxinoscope came with 10 paper strips that are double sided and the successive images show different types of movement related to circus or vaudeville acts. *note that the subject matter of several strips is racist in nature.

I chose to elaborate on this item because it is one of my favorites. It is an object of beauty in and of itself. More importantly, I love its simplicity, with nothing more than a drum and some mirrors it truly set the stage for moving pictures. In fact, Reynaud expanded on this simple toy, creating a means to project the images on the strips of paper and exhibited his moving picture well before the Lumiere Brothers.

Provenance: Leigh purchased from a French toy company in 2012. 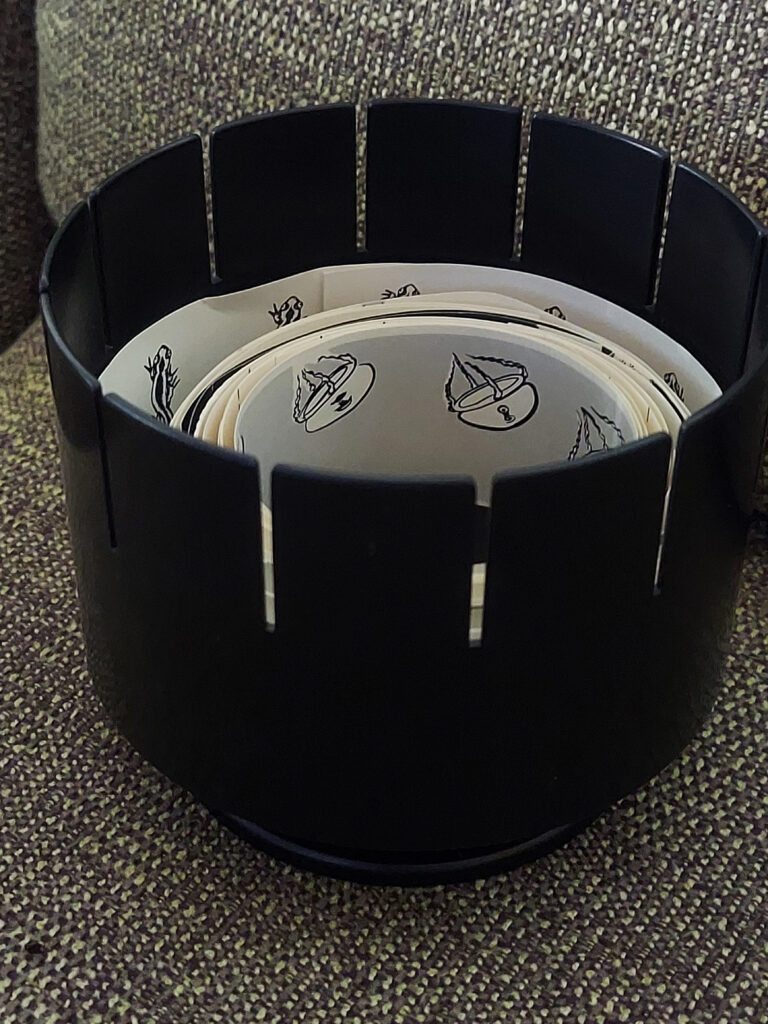 Zoetrope – Movie Motion Zoetrope, DaMert Company, Illustrations by Ruth Hayes in Original Box with the manual. The zoetrope is a toy that utilizes successive images drawn or printed on a strip of paper. The strip of paper is placed in a drum with slits at equal distances. The toy produces the illusion of motion when viewed through the slits while the drum is spinning. Zoetropes have been around since the mid 1800s. This particular version was copyrighted in 1992. This small plastic zoetrope comes with 12 animated strips and two strips that can be hand drawn. The zoetrope is 88.9 mm high and the cylinder has a 101.6 mm diameter. Illustrations include: moon orbiting earth, a frog leaping, a lizard moving, and space ships flying among others. 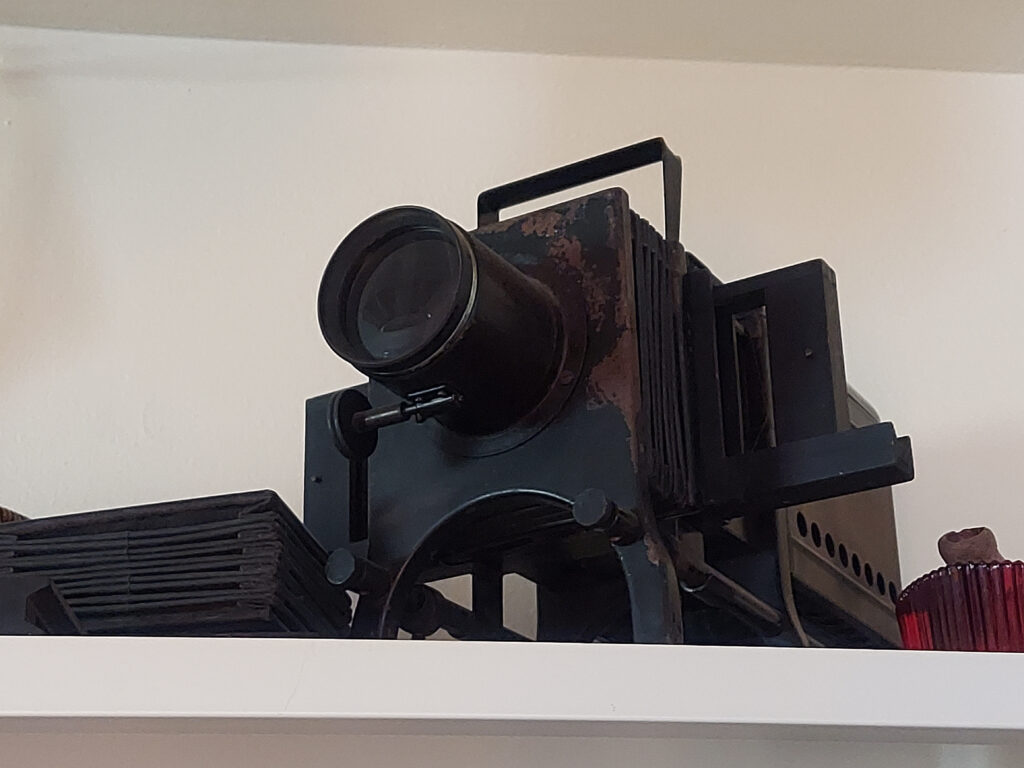 Magic Lantern – This is a Bausch & Lomb Balopticon model b lantern projector, pat # 49759, circa 1911. Constructed of metal this is an early example of an electric lantern using a light bulb as the source of illumination. The bellows stretch to help enlarge or decrease the image size. The slide tray holds single or double glass slides. Unlike the lanterns designed for home use, this model was designed for scientific use and has a higher quality lens. The lantern is constructed of metal, while the bellows are leather, and the slide tray is wood. The whole thing is black and came with an extra bellows. This item was gifted to Leigh in 2013 for her birthday. 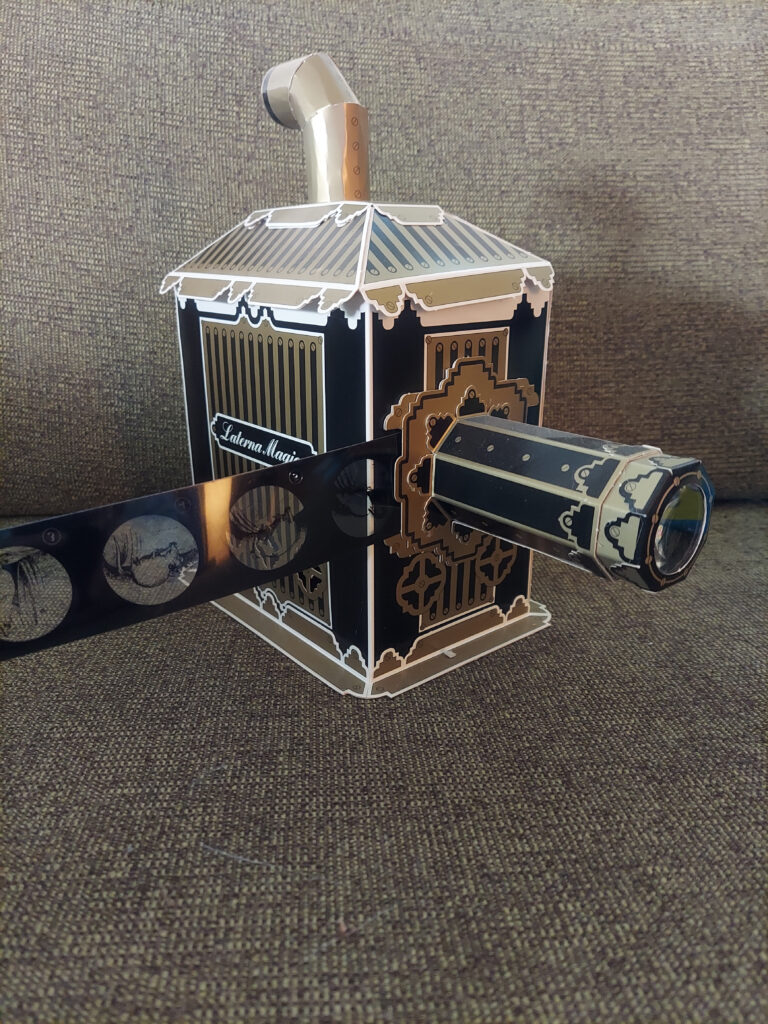 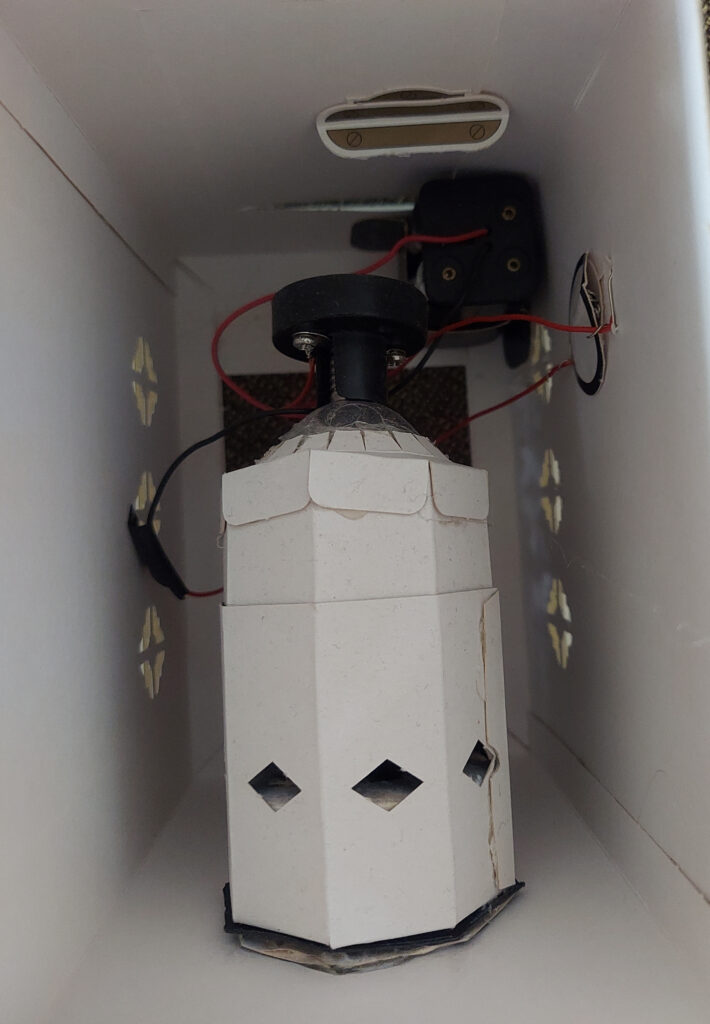 Lantern – This magic lantern was constructed by Leigh from a cardboard assembly kit. It is a working replica of a 19th century Magic Lantern. The kit consisted of 6 printed and pre-punched cardboard sheets, 3 lenses, a light bulb, and wiring, though it required glue to assemble and 4 AA batteries to run. The kit also included several plastic strips, four with pre-printed images and two blank ones for the creation of new slides. 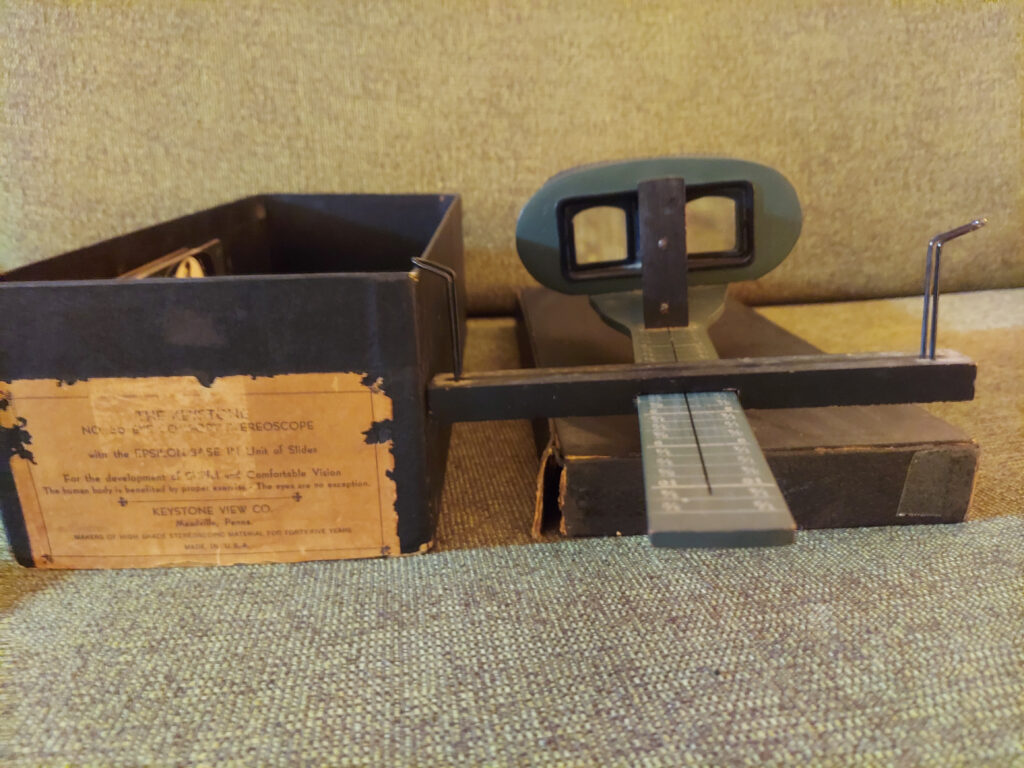 Stereoscope – Keystone Eye Comfort & Depth Perception Stereoscope Series Kit, Meadville, Pa. This Keystone series was produced in the 1900s to be used as a diagnostic aid for optometrists in determining the correct prescription. The viewer is black wood and metal, the focus slide has markings to help gauge depth perception and the bottom of the viewer has two clips designed so that the viewer could be attached to a stand for hands free viewing. There are ten accompanying slides, black card stock with two slightly different versions of the same image. 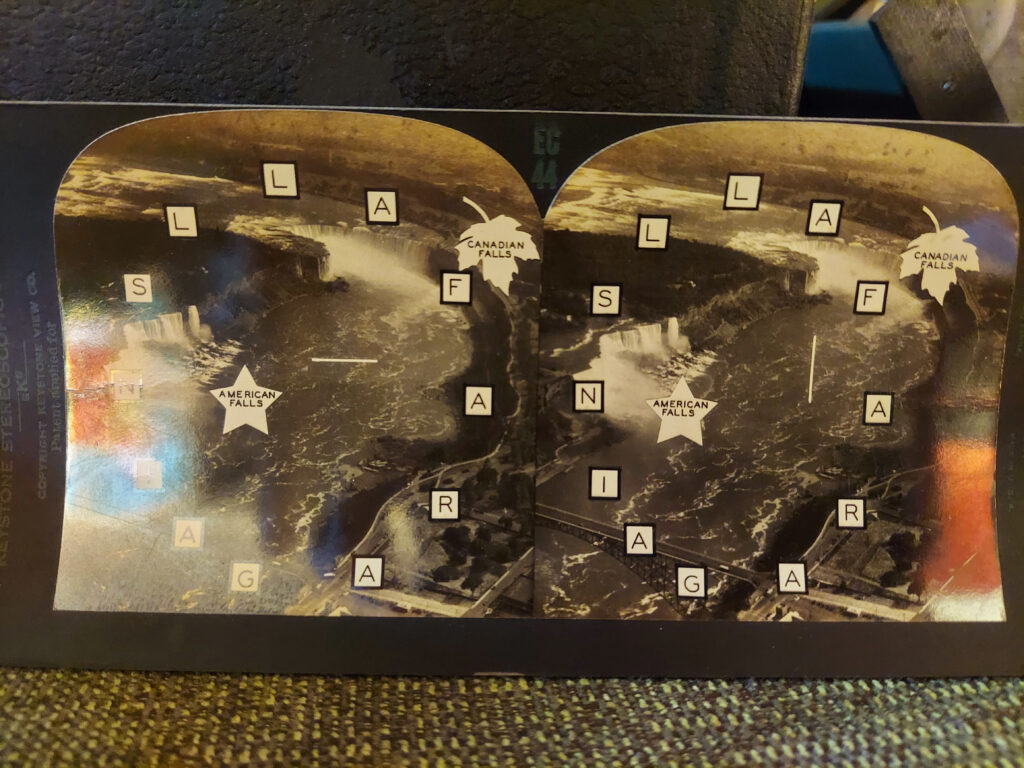 The images are marked with numbers and symbols for diagnosis of depth perception related issues. This item was acquired in its original box at an antique shop in Gettysburg, Pa. Leigh was very glad the seller was not quite aware of what he was selling. 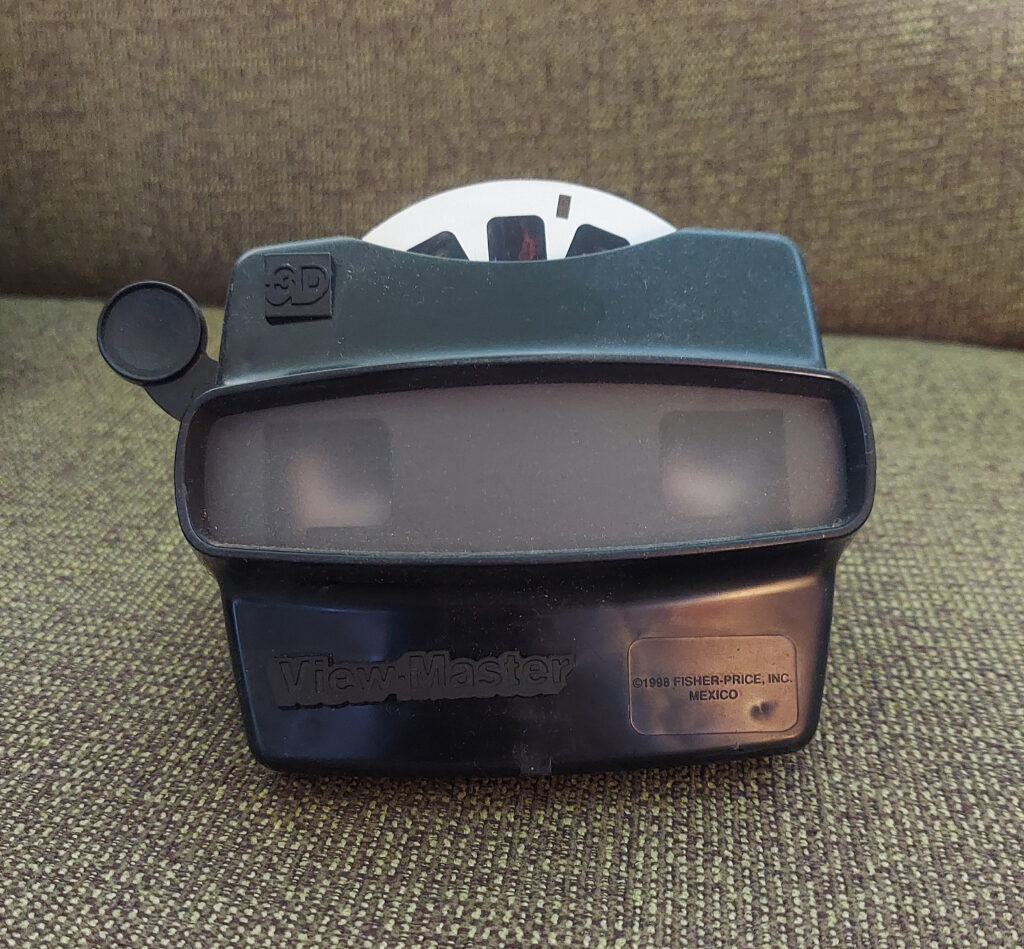 3D Viewmaster – This is a stereoscope toy which creates 3 dimensional images was made by Fisher Price. One places the thin cardboard disks containing seven stereoscopic pairs of small transparent color photographs into the special viewer. The images merge and create on three dimensional image. The images are rotated through the viewer with a small lever. A space above the lenses on the viewer shows the description on the cardboard disk that describes the image in the viewer. 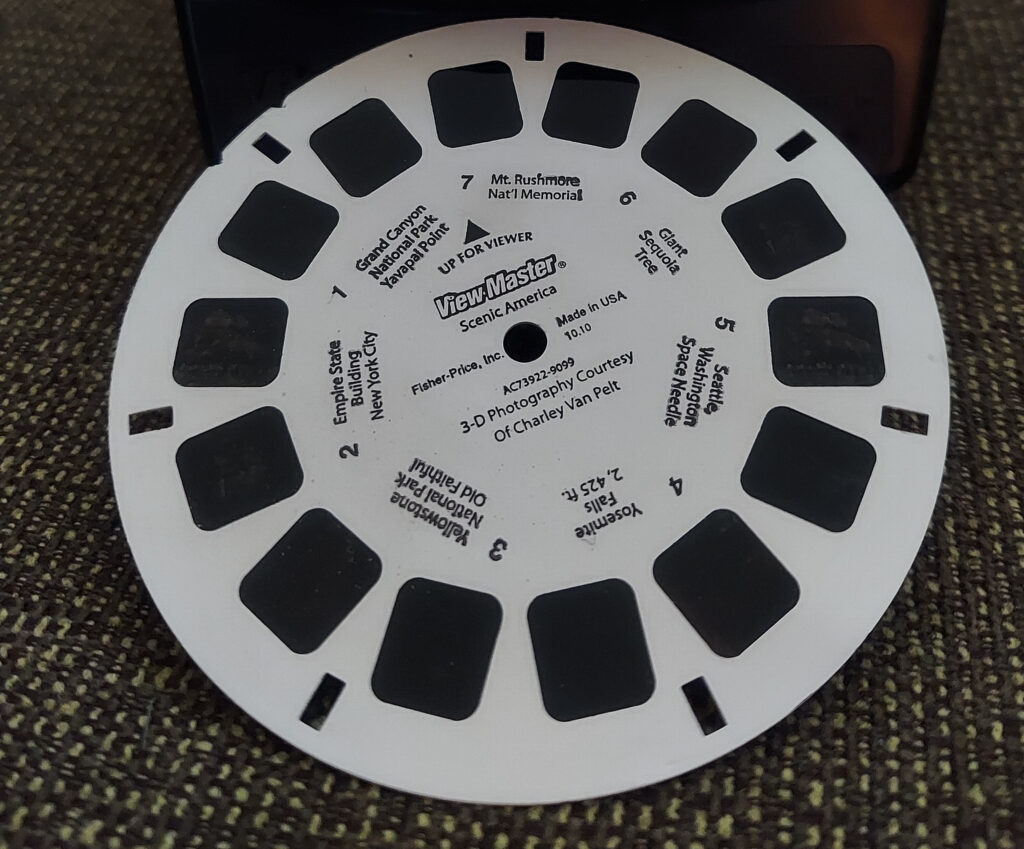 The viewmaster reel is titled “Scenic America” and features the 3D photography of Charley Van Pelt. This particular viewmaster was purchased in 2013 on a trip to several national parks. 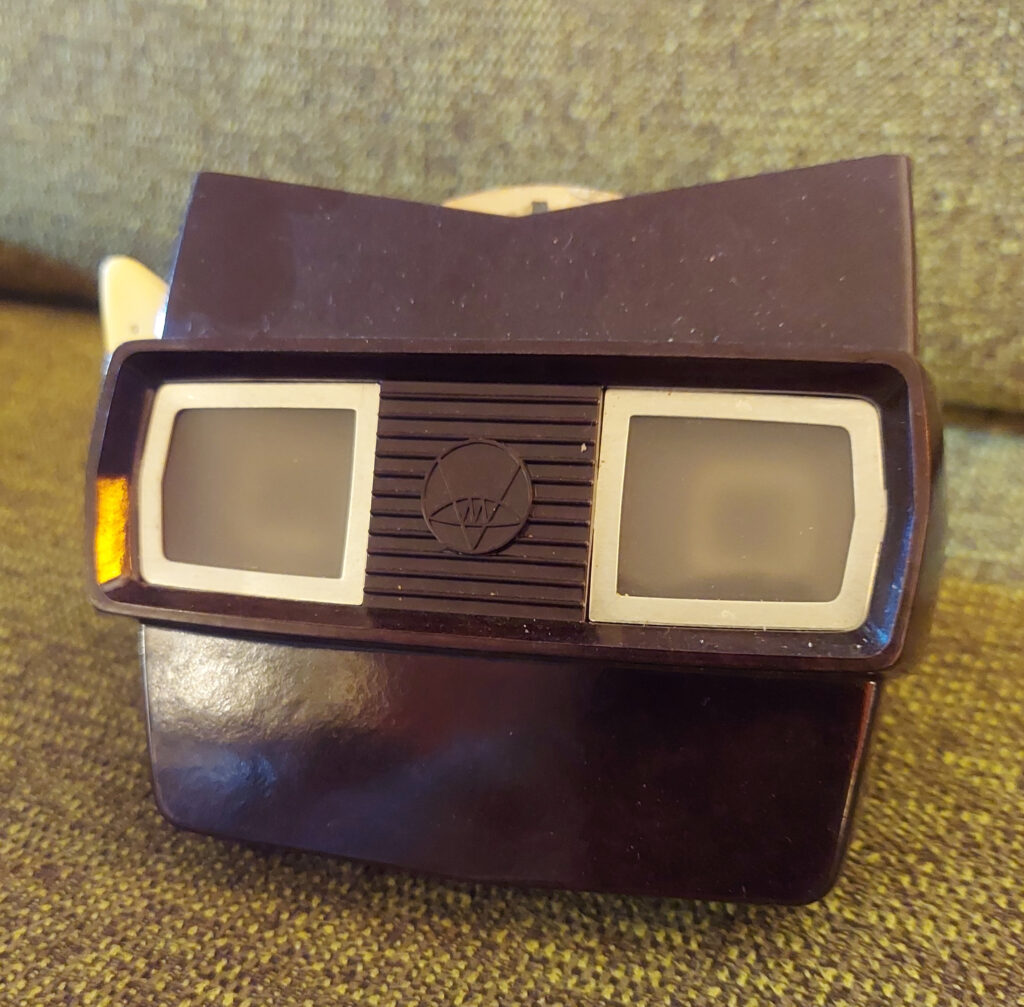 3D Viewmaster – This is a Sawyer’s viewmaster and dates from the 1950s. Made of sturdy brown bakelit, with a white level for forwarding turning the reel. 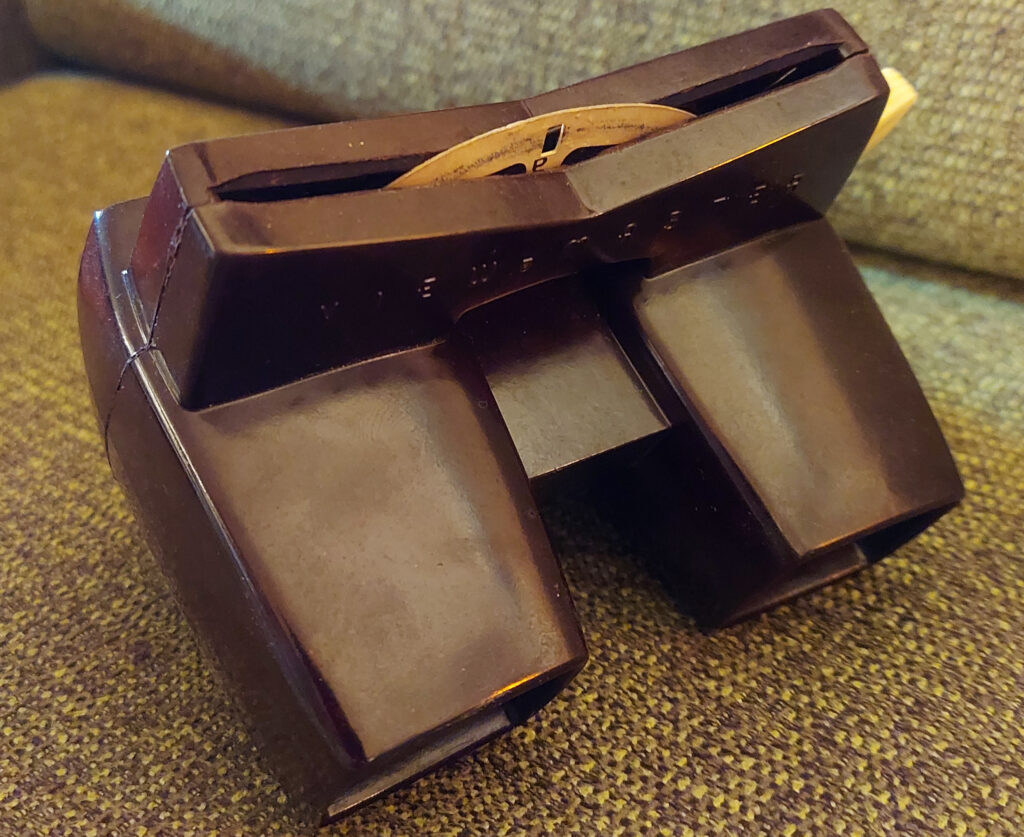 This viewmaster was purchased in an antique shop in Decatur, Illinois and is accompanied by a single reel numbered 810 and titled “Tom and Jerry in the Cat Trapper.” 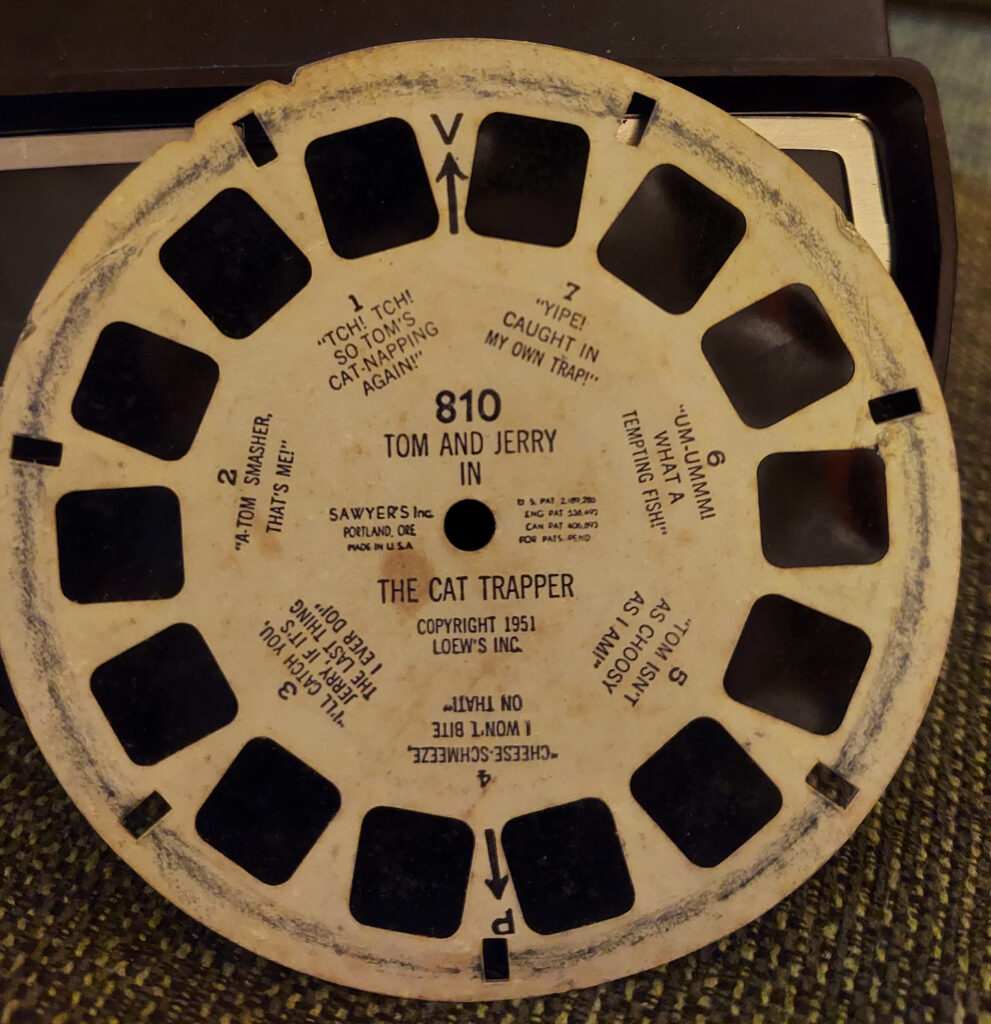 The images are stills from the animated series Tom and Jerry by Hannah Barbera, released in 1951. 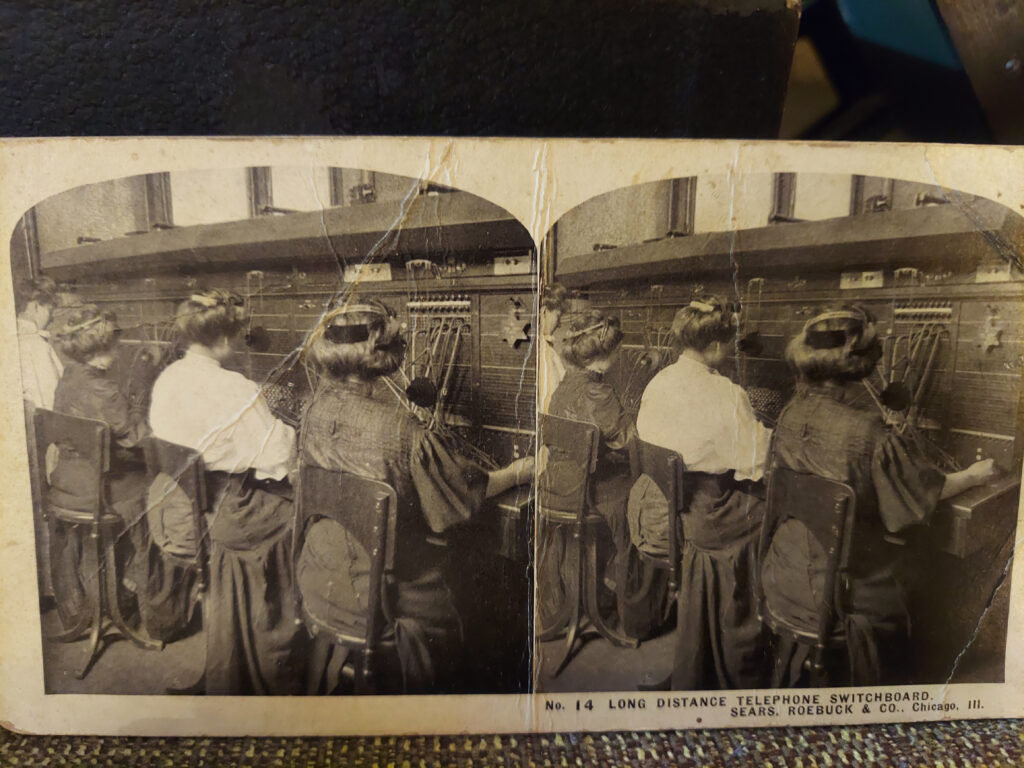 Stereoscopic slides – The set of slides offers a tour of the Sear, Roebuck, & Co offices is Chicago, Ill. The set originally was comprised of 50 numbered slides. Leigh’s set only includes 29 slides, several of which are duplicates 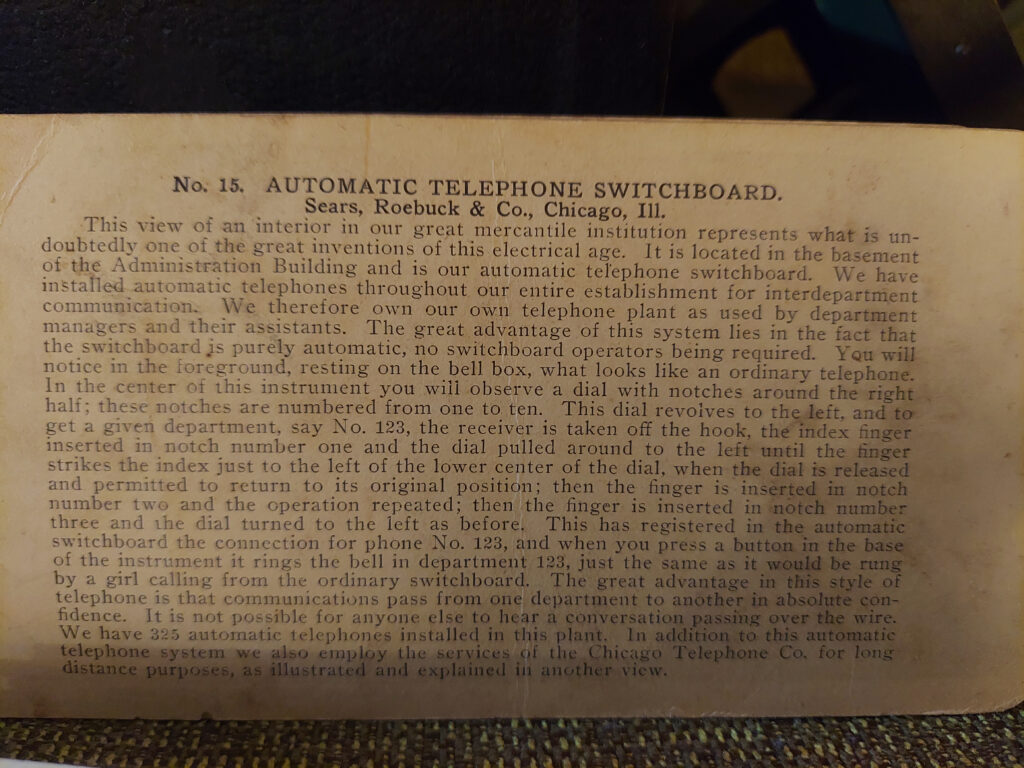 The set offers an interesting look at a 1906 corporate office, complete with a restaurant and hospital. The stereoscopic images are mounted on white card stock. The back of each slide includes a number and description. The first slide features Richard W. Sears at his desk and the back is a letter from Mr. Sears inviting the viewer to visit and offers this set of slides for those who are not able to do so. It appears to be signed by Mr. Sears. 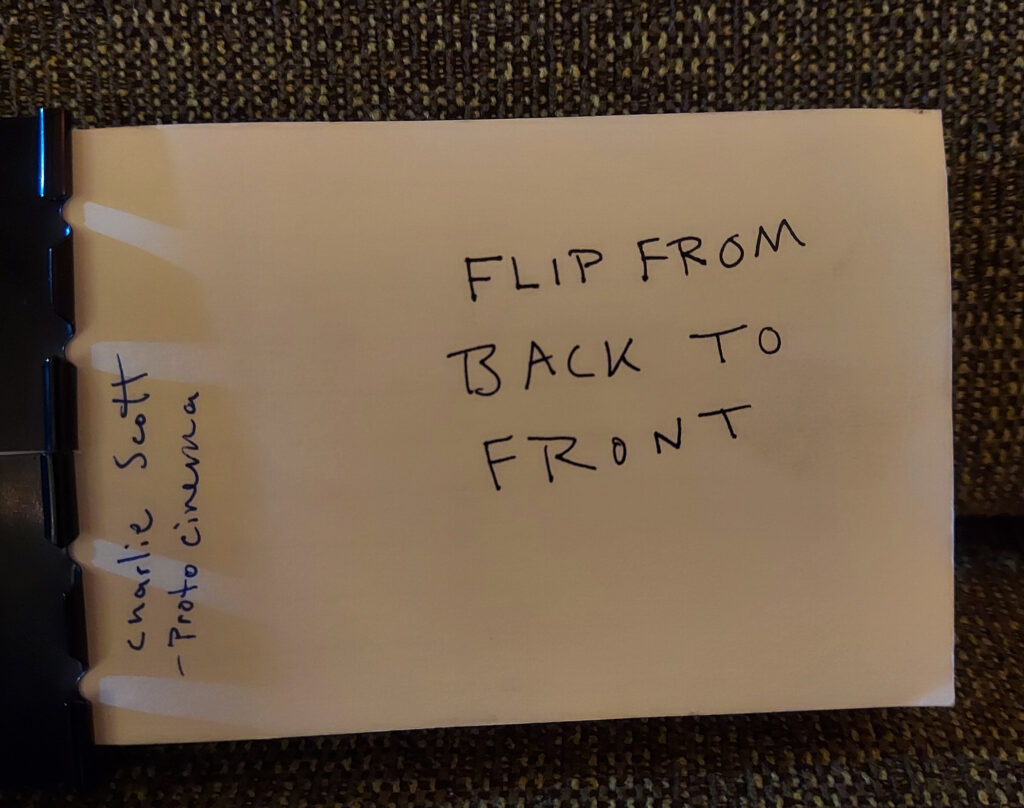 Flip book– This particular flip book was designed by Charlie Scott, a student in Leigh’s protocinematic production class, in 2016. The flip book is comprised of 90 pen and ink images drawn on 3×4 index cards, joined together with metal butterfly clips. The book flips from back to front and feature an abstract transformation from a line to a cube. The book was gifted to Leigh, when the course ended.

Camera Obscura – This camera obscura was purchased as a kit at the Camera Obscura and World Illusion gift shop. The kit included pre-cut pieces of wood, plastic lenses, and tissue paper screen. It required assembly and glue. Fully assembled, the camera obscura has two parts: the outer box contains the lens and the inner box contains the screen. The inner box is slid in and out to focus the image projected upside down on the screen. The camera obscura prefigures the still image camera.